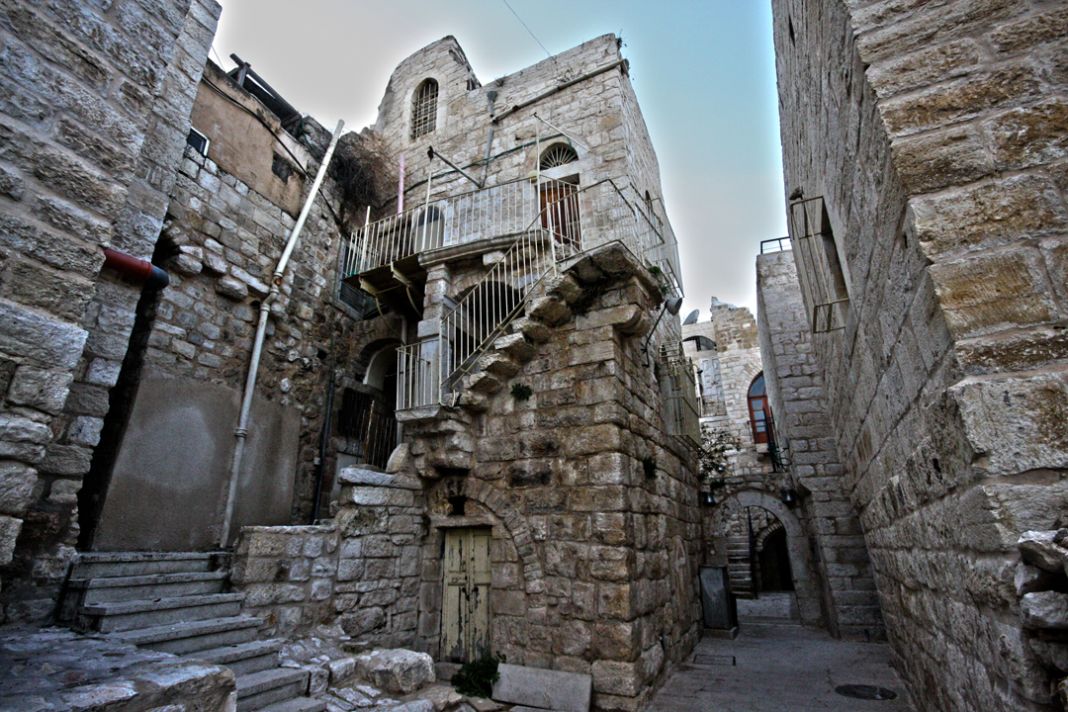 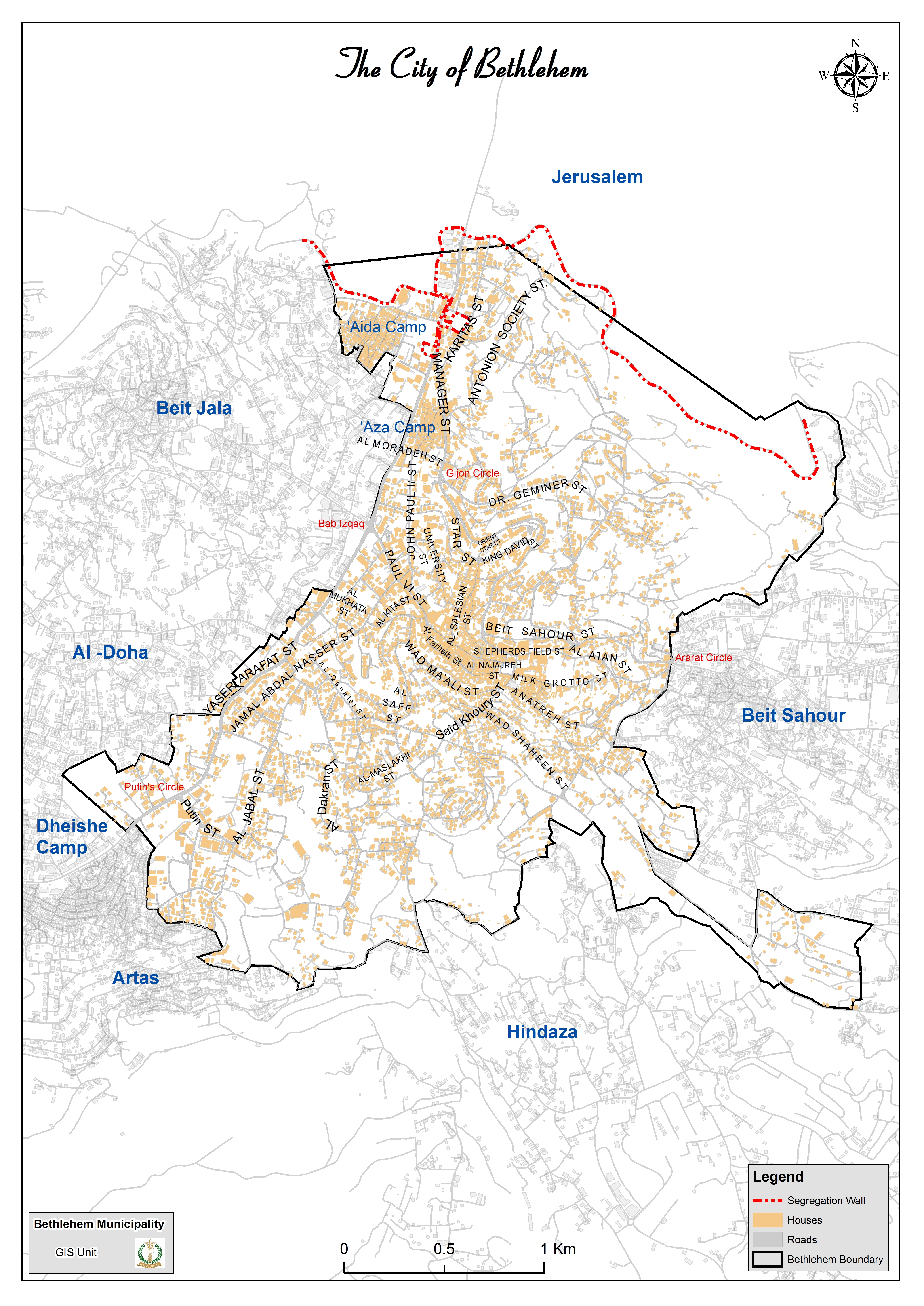 Bethlehem, is the name of a city in the south of Jerusalem city called The House of Eli Lahama, where Lahama is the name of Harvest and Fertility God among the Canaanites. Later, the name of the city became known as Beit Ham, then changed to Ephrata which is an Aramaic word means Fertility. Others said that the word Ephrata is a Chaldean word.

In Arabic, Beth means The House, and Lehem means Meat, which is considered as an expression of fertile pastures and the large number of livestock. In Hebrew, Bethlehem means The House of Bread. and noted that the significance of any of Bethlehem in all those languages ​​are referred to fertility and good soil. It is noticeable that in all those languages, Bethlehem refers to fertility and good soil.

There are several countries who have given the name of Bethlehem to their cities like Argentina, Uruguay, Portugal, Colombia, Mexico and the United States of America.

Bethlehem is one of the major cities in Bethlehem, located in the north of the province. It lies at a distance of 10 kms (6 miles) to the south of the Old City of Jerusalem. From the east, the town of Bethlehem is bounded by the town of Beit Sahour and from the west by the towns of Beit Jala and Al-Doha. From the north it is bordered by Jerusalem and the village of Sur Bahir and from the south by Solomon's Pools and the villages of al-Khader and Artas.

Bethlehem is situated on a mountainous site, 772 meters (2600 feet) above the level of the Mediterranean Sea. It has a Mediterranean climate, with hot and dry summers and cold and rainy winters. Bethlehem receives an average of 501 millimeters of rainfall annually, while the average temperature reaches 16.3 °C, and humidity rate ranges between 50-75%.

The Quarters of Bethlehem:

Bethlehem's historic residential quarters Harat Bethlehem have developed through the ages represent part of the cultural heritage of Bethlehem. Each Quarter consists of several families whose men used to gather together to discuss the affairs of their lives, and their own issues. These quarters are part of the cultural heritage in Bethlehem. These quarters are: Al-Farahya, Al-Najajreh, Al-Tarajmeh, Al-Anatreh, Al-Hreizat, Al-Qawawseh, Al-Fawaghreh and the Assyrians.

Bethlehem area includes three main camps, which are the Aida refugee camp, Beit Jibrin ('Azza) refugee camp, and Dheisheh refugee camp. These camps were established on lands that the UNRWA leased from the Jordanian government after the exodus of many Palestinians in 1948.

The old town of Bethlehem is considered to be of great significance, due to the presence of the most important Christian religious monuments.  The old town is located in the center of the city and connects the main streets in Bethlehem, which are: Star Street, Jerusalem Hebron Road, Manger Street, Beit Sahour Street, John Paul VI Street, Cinema Street, Frere Street, Jamal Abdel Nasser Street.

Bethlehem is one of the most important Palestinian cities to establish international conferences and forums. The city has hosted so many celebrations and events, including the reception of former US President George W. Bush, Bill Clinton, and the current US President Barack Obama during their visit to the Church of the Nativity, in addition to hosting the Conference of the Arab Economic and the sixth Conference of the Palestinian National Liberation Movement (Fateh).

Among the most important visits to Bethlehem are the visits of the popes of the Vatican's visit to the city, and the most recent one was the visit of His Holiness Pope Francis on May 25, 2014.

The city of Bethlehem is one of the holiest Christian sites in the world, since it’s identified as the birthplace of Jesus Christ. Bethlehem holds an extraordinary spiritual and historical significance due to its unique religious sites in particular the Nativity Church, Milk Grotto Church and other sites. Being the birth of Jesus, the city enjoys wide popularity especially during Christmas time, the Church of the Nativity was the first among the three churches built by the Emperor Constantine in the early fourth century AD when Christianity became the official state religion in 326 AD. In 2012, the Nativity Church and the old city were added to the list of World Heritage Sites, to become the, Church of the Nativity is the first Palestinian sites to be registered within the UNESCO World Heritage List.

One of the most important mosques in the city is the Mosque of Omar bin al-Khattab, which is located in the manger Square. Bethlehem is an area rich with historical and religious sites. Where one can find some Roman, Byzantine, Islamic ruins. In addition, there are many sites of special interest to followers of the three monotheistic religions, as Rachel's Tomb, and the wells of King David, the water channel, Jacir Palace, and Solomon's Pools and others, which made it one of the most important tourist cities in the world, with approximately one million tourists visiting per year. In Bethlehem, there are more than 30 hotels and tourist resorts and more than 138 restaurants.