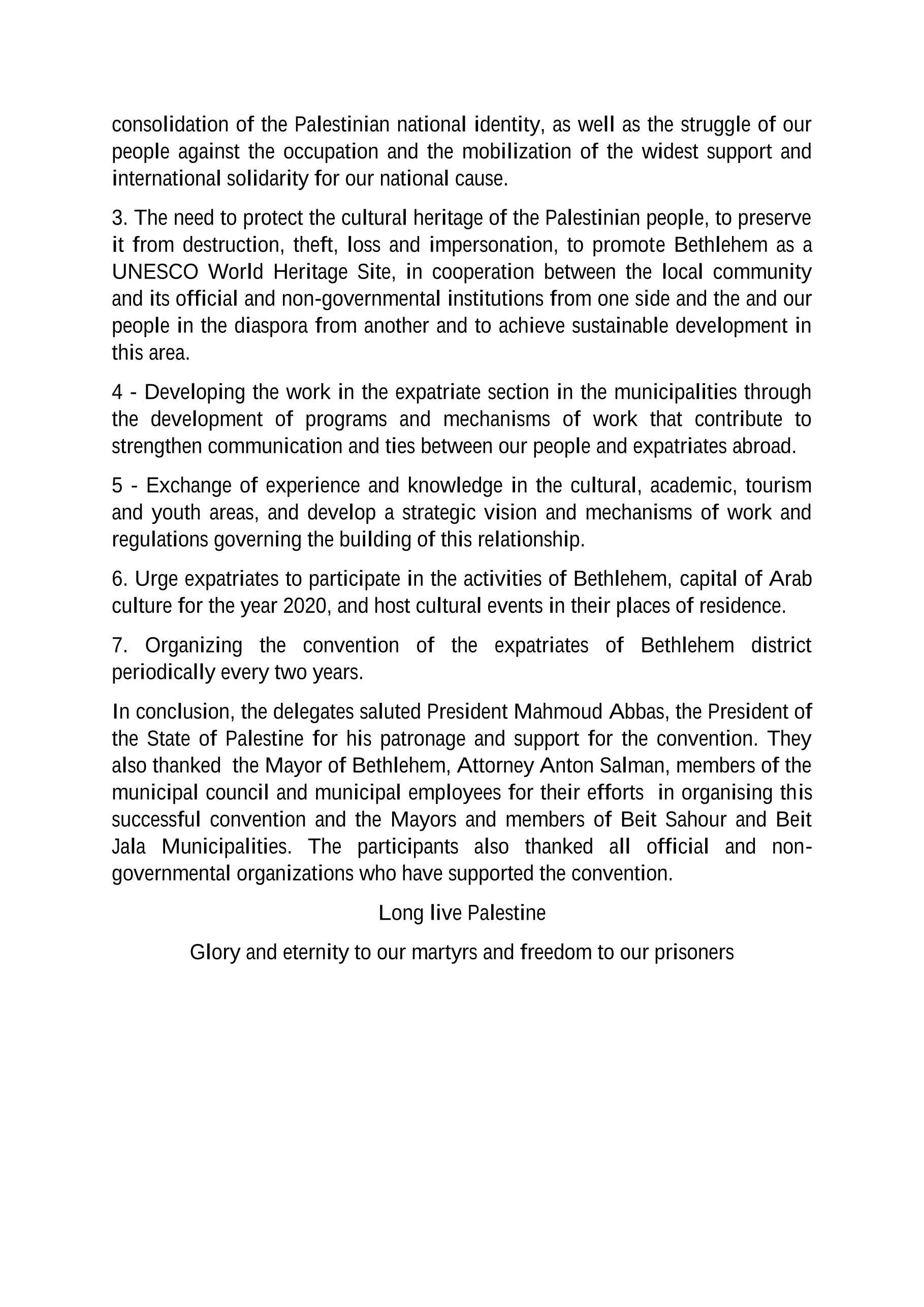 Under the patronage of His Excellency President Mahmoud Abbas, President of the State of Palestine, and at the invitation of the Municipality of Bethlehem, in cooperation with the municipalities of Beit Jala and Beit Sahour, and with the participation of the Prime Minister Dr. Mohammed Ashtayeh, Bethlehem District Diaspora Convention II was held in Bethlehem between the 11-14 of July 2019 with the participation of expatriates from 20 countries. During the meetings, the participants discussed important topics that affect all aspects of life for the Palestinian people in their homeland and the diaspora.

The Convention adopted the following resolutions:

1- The necessity of enhancing the role of the existing Palestinian institutions in the countries of exile on the foundations of democratic representation, within the framework of national unity and pluralism, and activating its role to mobilize support for the just cause of our people and to strengthen cultural and societal ties between the people of the homeland and our people in the countries of diaspora, which supports our people and their steadfastness in their homeland.

2 - The need to strengthen the cultural and heritage aspects as an important part of the historical and cultural heritage of our Palestinian people, a unification factor among our people at home and in alienation, and an effective tool in the consolidation of the Palestinian national identity, as well as the struggle of our people against the occupation and the mobilization of the widest support and international solidarity for our national cause.

3. The need to protect the cultural heritage of the Palestinian people, to preserve it from destruction, theft, loss and impersonation, to promote Bethlehem as a UNESCO World Heritage Site, in cooperation between the local community and its official and non-governmental institutions from one side and the and our people in the diaspora from another and to achieve sustainable development in this area.

4 - Developing the work in the expatriate section in the municipalities through the development of programs and mechanisms of work that contribute to strengthen communication and ties between our people and expatriates abroad.

5 - Exchange of experience and knowledge in the cultural, academic, tourism and youth areas, and develop a strategic vision and mechanisms of work and regulations governing the building of this relationship.

6. Urge expatriates to participate in the activities of Bethlehem, capital of Arab culture for the year 2020, and host cultural events in their places of residence.

7. Organizing the convention of the expatriates of Bethlehem district periodically every two years.

In conclusion, the delegates saluted President Mahmoud Abbas, the President of the State of Palestine for his patronage and support for the convention. They also thanked  the Mayor of Bethlehem, Attorney Anton Salman, members of the municipal council and municipal employees for their efforts  in organising this successful convention and the Mayors and members of Beit Sahour and Beit Jala Municipalities. The participants also thanked all official and non-governmental organizations who have supported the convention.

Glory and eternity to our martyrs and freedom to our prisoners